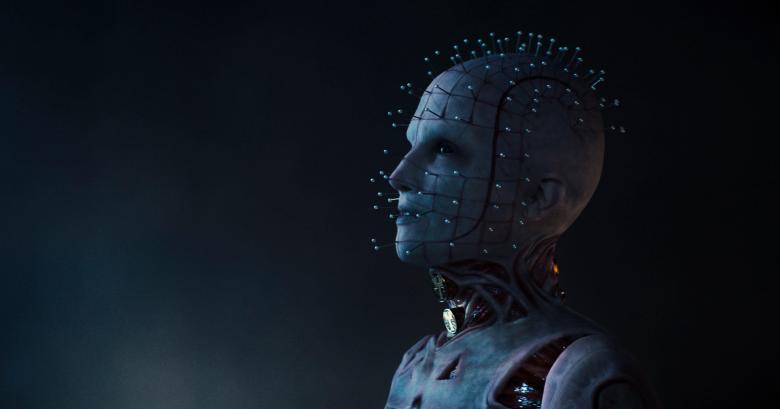 Recreating the nightmarish visions of Clive Barker’s “Hellraiser” was always going to be a mammoth task. “It’s the top tier of both the most rewarding dream job and the hardest thing we’ve ever had to do,” recalled Josh Russell, the special makeup effects supervisor on Hulu’s remake of the 1987 horror classic. “This was the biggest creature effects movie shooting anywhere in the world at the time.”

A significant factor in the new film’s success or failure was the creation of the hellish Cenobites, whose leader, Pinhead, is a horror icon on the level of Freddy Krueger, Michael Myers, or Leatherface. Russell’s initial stab at ensuring that success took place on an accelerated timeline: Presented with finished designs from lead concept designer Keith Thompson (like Russell, a longtime collaborator of “Hellraiser” director David Bruckner), Russell and his wife, Sierra, had just three days to prep for a meeting with the studio.

“We pulled a 36-hour marathon and sculpted a concept maquette of Pinhead based on the designs they had shown us,” Russell said. “We were on the Zoom meeting, I’m rolling them through this long pitch deck, and then I turned the camera around, and was like, ‘And we made this,’ and showed them the Pinhead model.” It helped seal the deal, proving they could work fast and showcasing the quality of their work.

Once part of “Hellraiser,” the Russells and their team continued to adjust everything from creature design to the execution of the practical effects. The Pinhead maquette was originally “more grizzly and gorier. All the exposed muscle tissue and stuff was very dirty, butcher shop-style, the cuts around the skin were gnarled looking.” Buckner pushed back, wanting it to look “extremely tailored and ornate.”

Pinhead, played by Jamie Clayton, was the centerpiece from which the creative for all the other hellish manifestations fanned out. A critical design choice was a total lack of “earthly clothing.”

“Pinhead is all skin and flesh being pulled with bits of the leviathan technology in her throat and the pearls on the pins. That informed how to make the rest of them work together,” Russell said, adding that all of the Cenobites included elements of the pearl-headed pins. Part of the discussion also involved the abandoning of the characters’  traditional, punk-and-BDSM-inspired leather look. “I thought that if we have any element of that going into these characters, it was going to die for the sake of comparison,” Russell said, saying it needed to “live or die on its own accord and be its own thing and a fresh concept.”

Part of that meant creating several new Cenobites, though not all end up in the finished film. Russell and Bruckner worked to turn out five that would feature prominently, namely Pinhead, Chatterer, Weeper, Asphyx, and Gasp.

“Chatterer is a legacy character, and Gasp is a new version of the female Cenobite from the original movie,” Russell said, adding that Weeper and Asphyx “are wholly new concepts.” He enlisted a team of sculptors, including “Hellraiser” fan Mike Rotella, who was the first person hired because “Chatterer was his thing.” Dave Grasso and Jaremy Aiello were brought on to do the body based on what Rotella did with the head.

“At first, Mike sculpted an obtuse monster version from the design David had given us. We all loved it, but David freaked out,” Russell recalled. The director apparently felt it was “too much monster,” so they dialed it back, landing in the middle between the two versions.

At that point, Jason Liles had been cast as Chatterer and was available so they could begin body casting. This would not be the case for Gasp.

“We told the studio we needed a body double so we could build it and hope the rubber stretched to get the actress, Selina Lo, in there.” Gasp involved a “super complicated, tight suit” with a metal framework pulling her skin and a costume sewn over it. There were also four different facial appliances with a headpiece and a veil piece on top of that. All of that had to be secure and not wobble and was attached to the throat piece, pulling strings attaching to the outside cord. Russell described it as “the most elaborate Halloween costume you would ever want to think of.”

It took Russell and the team between four and five hours to get Pinhead and Gasp camera ready, while Chatterer and Asphex were in head-to-toe suits, and took around 20 minutes. Weeper took an extra 30 minutes due to a jaw attachment and hand appliances that needed to be glued on. The suits weighed between 15 and 25 pounds and were made of silicone rubber rather than foam latex as silicone “lends itself to looking more like real translucent skin.”

Russell confirmed there was very little VFX work done on the Cenobites in post-production, other than two-dimensional shaping and squeezing forms “to be smaller than they could physically be on a person.” However, there was a slight design change to Pinhead.

“David decided the neck piece looked better blended straight onto the body,” a piece of the application Clayton had a love-hate relationship with despite it literally helping her find the character’s voice. “It was a first for me to see how much it affected how she talked. She didn’t want it on whenever she didn’t have to have to be wearing it. We had to run in and get it off her between setups to give her a break.”

“She also loved it because it completed her feeling like she was in that character’s shoes. We had to loan the neck piece out to them to let her do her ADR work a couple of months into post,” he concluded. “She didn’t want to do it without it.”

Sign Up: Stay on top of the latest breaking film and TV news! Sign up for our Email Newsletters here.