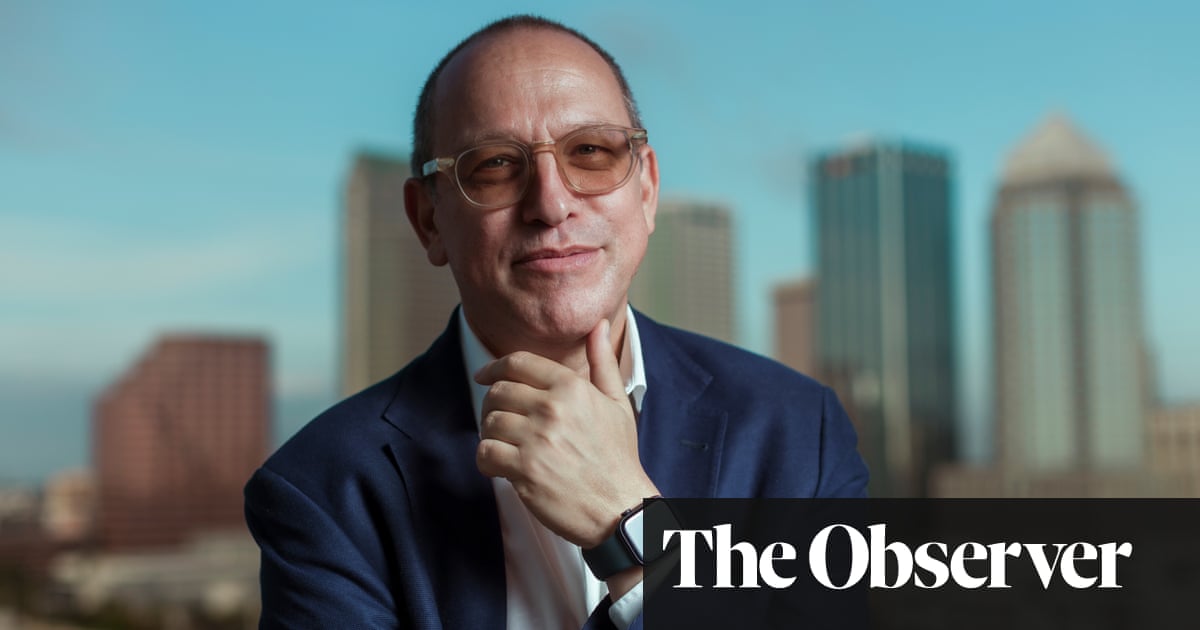 Shai Weiss is sitting in a Florida hotel function room, picking apart the decor. “It’s stylised, rather than stylish … It looks cheap. Look at the cushions.”

Soft furnishings may seem an unlikely part of an airline chief executive’s repertoire, but being “multi-dimensional” is a key asset, says the Virgin Atlantic boss. He is a former banker, tank commander and tech company leader – not, he stresses, just “the finance guy”.

Last week, in the competition for customers on the lucrative transatlantic routes, Virgin unveiled its new Airbus 330neo plane, where the details of plush new cabins, down to the seat pitch, are rigorously scrutinised as part of the airline’s multibillion-dollar investment.

The plane’s inaugural flight to Tampa saw Weiss gladhanding guests and media from 6am at London Heathrow, and continued across a 10-hour flight to press conferences and meetings with dignitaries and shareholders in the US – his longest day at work for some time. But he is ebullient after a rocky few years – for the airline and him personally.

Virgin Atlantic was, like carriers worldwide, grounded by Covid but, unable to access the government-backed loans given to rivals, came nearer to the brink than most before a rescue plan was agreed. “Let’s call a dog a dog – some people thought we might not make it,” he says.

Weiss had already been implementing cost-cutting plans for the airline, which had been teetering between profit and loss even in good times. These

Best advice he’s been given An extension of the famous quote by business writer Jim Collins: “Always have the right people on the bus. But know how to drive the bus.”

Worst career mistake “I took a job that my wife said wasn’t for me. Within three hours I knew it wasn’t going to work, but I stayed a year and a half.”

Phrase he overuses “What else?”

How he relaxes Season ticket holder in “excellent seats” at Arsenal; family time; walking and exploring London and other cities.

cuts were accelerated by the pandemic, using “a crisis as an opportunity”, he says, to ask: “Can we be more brutally focused, can we go even further?”

The airline was pared back to the bone: 40-45% of staff gone, and only frontline crew rehired when travel picked up again. The route network was cut and its 747 jumbos retired. “We’ve gone further and deeper than any other airline. Could one have done this without this existential level of crisis? Theoretically, yes, practically no. That’s how life is. You can either get the most out of it for your people, or give up.”

Just as the last Omicron wave of Covid was fading, Weiss faced his own existential crisis. Unusually, he went public early to staff about his diagnosis of stage 3 colon cancer. After immediate surgery and chemotherapy, he is in remission. Chemo was “extremely tough”, he says, “and it continues to be, you know, not the easiest of times.”

Cancer has not given him “revelations”, as he puts it, but: “I’ve learned to trust more and more over the past few years, and in the past year, I’ve seen how the team operate, because I was not there every single day.” His voice cracks as he say he feels “blessed to have an amazing wife and two children … I really am the luckiest guy”.

He does now, though, urge everyone over 40 to have a colonoscopy – and he takes issue with the language that still lingers around cancer. “It’s not a fight, it’s not a war, it’s not the big C. It’s just cancer. Nobody did anything bad to get cancer.

“It happens to a lot of people. Every one of us deals with it individually. Some of us are lucky to get through it, and some of us are not.”

While Weiss takes issue with combative language in health, he otherwise describes himself as a fighter – tougher than his mildly geeky, smiling appearance and background in tech and finance might suggest.

Growing up in Jerusalem, Weiss chose to extend his compulsory military service by a year to become a platoon commander in the tank corps. He declines to answer some questions: “Not everybody likes the military. I’m not a Rambo.

“Was I shot at? Did I shoot back? Yes. Did I see the hardship of conflict and devastation it creates? Yes.”

And he adds: “I wanted to be in combat. I know now everyone is in intelligence or cybersecurity. Maybe I wasn’t smart enough. I wanted to do combat.”

Weiss is a UK citizen from birth, as his mother was born in London in 1939, her parents having escaped there from the Netherlands; his paternal grandparents reached Israel from Poland, but many relatives did not survive the Holocaust.

He moved to the UK in 1997 as an investment banker for Morgan Stanley. He worked in the tech sector, including on the merger and takeovers that formed Virgin Media, and became further involved with Virgin by working on the deal that made Delta a 49% shareholder in Richard Branson’s airline.

Weiss joined the carrier full-time in 2014 in commercial and finance roles – “people think of me as the finance guy; I’m not the finance guy” – before taking the helm in 2019.

The airline has changed culture considerably since the days when no inaugural flight was complete without Branson manhandling a scantily-clad celebrity modelon the wing for the cameras. Weiss said he did not have any difficult conversations: “Who am I to tell Richard Branson what to do? He’s the master of representing the zeitgeist. Can I fault him for the fact that 20 years ago … this is how he got attention?”

The modern Virgin Atlantic has made several high-profile changes to position itself as diverse and inclusive. Weiss says: “This is absolutely not tokenism. It comes from our people.”

He likes to describe staff as Virgin’s “secret sauce” – even if there’s now substantially less sauce. “I won’t stop – the fact that I say the secret sauce is our people is that we have amazing talent, and they should be included and inclusive.”

The move to relax makeup policy came, he said, from a female cabin crew member who wrote to Weiss saying she didn’t understand why only women had to follow such rules. The crew then asked whether men could wear it too: “I said, no problem as long as you adhere to our criteria, which is really the colour of the red.”

Changing crew dress codes to allow visible tattoosand for staff to wear whichever skirts or trousers as they wish, regardless of gender, followed this year. But “the issue is, they can – they know they have the freedom to feel comfortable as they are. I’m not judging quantity – I’m judging are they happy.”

Aviation’s biggest issue remains its environmental toll. Despite the hype over the A330neo’s comparative merits as “the greenest in the skies”, Weiss admits: “When you look at what is available on the path to net zero, the number one thing for long-haul carriers is your fleet. We’ve invested billions – it’s not an eco-plane, but it’s the most efficient plane out there.”

The second big question is sustainable aviation fuel – but Weiss is concerned by the rate of progress towards ensuring that a fraction of jet fuel used by carriers is sustainable – synthetic, or made from waste – rather than the standard kerosene. “We have nothing – the framework, the legislation, the funding. My fear is that the UK will not have enough plants to deliver this 10%. And that’s only 10%.”

Challenges remain, but Weiss says he is much happier with where Virgin Atlantic is now, a “mature” airline rather than just Branson’s baby. “After 38 years, we all grow. Now I would say we are a high-performing adult.”