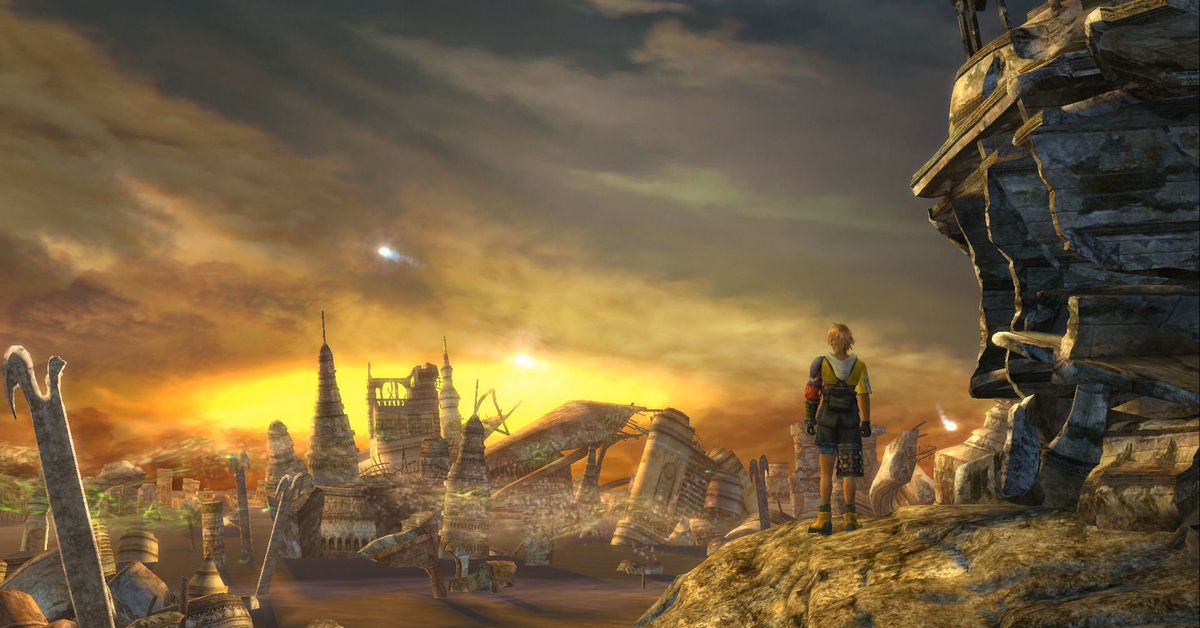 The worlds of Final Fantasy and fashion have crossed paths many times over the years, at times in ambitious mainstream collaborations. As we approach the 16th mainline entry in a franchise boasting gorgeous art, colors, and designs, though, one entry’s fashion statement stands above the rest. Final Fantasy 10 is not only filled with bold designs — it’s a time capsule mashup of ’90s flair.

Unlike previous Final Fantasy games, the 10th entry didn’t simply offer new looks based on what the developers knew of design and history, but pulled in influences from the previous decade’s pop culture. FF10’s developers chose to borrow pieces from the real world when crafting ensembles, simultaneously grounding them in ’90s subculture fashion aesthetics while making each wardrobe layered and expressive. It’s a choice that has earned the game staying power all these years later, letting players relate to not only the game’s characters but to their own history outside of the game.

The outfits in FF10 are a mixture of show, tell, and dazzle. Some believe they’re too outrageous for the land, harder to take seriously than the more blended looks in FF7 or FF8, but FF10 differs from the dark futures we’re used to. The game’s world, Spira, is a tropical paradise, full of all types who express themselves, joyfully or through pain. In its diverse setting, giant feathered shoulder pads and pants with one leg longer than the other meet sunglasses, leather straps, and people who look more ready to open an S&M club than fight.

This blend channels the nostalgia of the Hot Topic and Spencer Gifts stores of the ’90s. Millennials may remember the layouts of these mall staples, with racks of bright, oversized button-up anime shirts next to fingerless gloves, webbed chokers leading to black lipstick, and Zelda wristbands at the counter. Japanese culture and clothing prominently influenced the game’s fashion as well, but many of the main characters were given a more Americanized look.

The overall styles aren’t difficult to pick apart, but I recently spoke with Samantha Duncan — a self-proclaimed Hot Topic addict and poet who wrote Playing One on TV, a chapbook about ’90s television characters — to dissect them in detail.

Tidus is FF10’s protagonist, and his amalgamation of ’90s punk and hip-hop culture is prominent. Wearing sports gear, a medallion, overalls with uneven pant legs, and knockoff Timberlands, he looks like a child adorned in his father’s hand-me-downs. According to Duncan, his old-school boy band hairstyle fits the ’90s perfectly, and he could pass for LL Cool J guesting in a TLC video: “He’s definitely an inspiration for young Justin Bieber, right?”

Yuna is tradition wrapped in a pretty bow: femininity, kindness, and vulnerability, a tight but modest appearance. “I see the spiritual flower child here, but she also plays sad songs on the guitar at Lilith Fair,” said Duncan. Seems relevant considering her change in the sequel, FF10-2, where she embraced the sexy, rebellious adventurer with twin pistols instead of a staff, leaving most of the religion behind. “The detached sleeves and long dark skirt give off that magical witchy mood,” Duncan continued, “and the chunky bob haircut has a pop-goth vibe, for when you want to be more of a chick than a woman.” Like our protagonist, Yuna was on a path of adulthood and discovery.

For Wakka and the others from the isle of Besaid, fashion is about comfort, but not at the cost of looking fly. He’s chaotic and colorful, wearing clothes that seem impractical in water-based sports, but what he took from the wild side of the ’90s is that hair. “His hair looks like he lost a bet,” Duncan said of the fire-red faux-hawk. Wakka is clueless and often hard to like, and his outfit reflects that after only a few interactions, “like if Jim Carrey made a culturally insensitive movie about a native islander, dumb as rocks but really good at volleyball.”

In contrast, Auron is a blend of mystery and practicality. He seems normal, until you talk about his ridiculous collar and the double belt. He still wants to make a statement, however, rocking the single glove and spiky hair with shades. Auron and Lulu are almost stylistically opposed to the other characters, preferring to be fashionably subdued. They’re the only two who seem to be making less of a statement with their clothing choices and are focused more on representing their true selves.

Lulu as Goth Mommy with belts, braids, fur, and makeup is stunning, but the look makes for impractical attire in most environments. “Be still my Hot Topic heart! This is what the female characters would’ve looked like if Game of Thrones was done in the ’90s, or if Disney went dark and made a goth princess,” Duncan said, admiring the web of belts and leggings. “This is bog witch meets boss bitch before either of those were a thing.”

Compare them to Rikku and her people, the Al Bhed, who embrace hard work, steampunk, and Spencer’s-esque bondage-lite fashions. Rikku is that typical ’90s girl, with bland boots, a cropped tank top, and an outfit patched together from several different closets. Rikku’s hair is a bit chunky and the bangs help it frame the young girl’s face, according to Duncan, but more importantly, “Love the band on the upper arm, totally a thing I rocked then.” It’s another outfit that isn’t practical, but expresses her free spirit and eagerness. “I get bubbly Tomb Raider vibes,” Duncan said, evoking another icon. “Her outfit reminds me of Laura Dern in Jurassic Park, with unnecessarily short shorts.”

Much like Jecht, Cid, and Brother, many men in the game sport muscles and tattoos for machismo points. Whereas Cid’s head tattoo evokes someone who has been through some shit, Jecht and Brother’s ink is there to project and look intimidating. Tattoos felt edgy in the ’90s. Duncan couldn’t get over Brother’s look: “This dude could have been an extra in The Fifth Element, back when bleach-blond hair and shades indicated futurism.”

Then there’s Dona, a woman who acknowledges her sexual confidence and role as a Summoner. “This gives ’90s female rapper vibes,” Duncan said. “Lil’ Kim would wear very little, but add badass accessories that symbolized her self-worth.” The skirt is long but open, and the extra items she wears are strategic, along with boots that look powerful, made for stomping. She also has a bodyguard, buff and shirtless, “putting her in a position of power over men, subverting traditional patriarchal narratives,” Duncan said. In a world of people who are already pretty extra, Dona is a down-to-Earth version of Yunalesca.

One could imagine these characters on a Paris runway, even if they’re only sporting a magnificent cloak and underwear. Not everyone in the game looks like they flow together, however, with Lord Braska’s contrasting patterns and gaudy forehead accessory; “Did he steal that jewel from a Troll doll?” Duncan said, pointing out that Maechen looks like a pirate who took the Pope’s hat “or a maniacal jester rejected from the Medieval Times [restaurant].”

We joke, but we love. In the years since FF10’s release, these characters have struck a chord in large part because of how they bring back these sorts of memories. Cloud will always fit wherever you put him, but seeing Tidus instantly takes you to a time and place in a way few game characters can match, thanks to Square’s unique approach to in-game fashion.