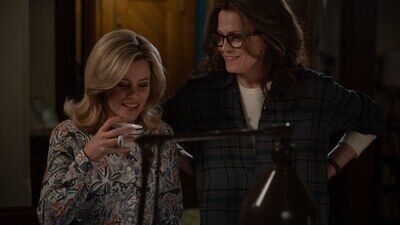 I saw both films at Sundance and felt their urgency deeply. After the events of June, I watched each film again and was filled with rage and despair. The movies complement each other, showing from different angles what a world before Roe was like for many women, and especially how those of certain economic and racial groups were unfairly impacted by the lack of agency they had over their own medical needs. To know 50 years on, this agency stripped once again is almost unbearable.

For “Carol” screenwriter Phyllis Nagy, it was important that her directorial debut “Call Jane” be easy to watch so audiences might come to think about its themes from new perspectives. Centering on Joy (Elizabeth Banks), a 1960s mother and housewife, who joins the Janes after being denied an medically legal abortion for a pregnancy that almost certainly would end her life, the film’s focus is specifically on abortion as a medical procedure. Through her work with the collective, Joy sees the many kinds of women who seek abortion, coming to understand that no matter why are seeking the procedure, they all have a right to access and for it to be safe.

For this month’s Female Filmmakers in Focus column RogerEbert.com spoke to Nagy over Zoom about the importance of collective action, the violence of civility, and depicting abortion as the ordinary medical procedure it is.

You joined this project as it was in development. What was your background with the Jane Collection before coming on board as director?

I didn’t know anything about it. None of us really did before reading the script. It’s a failure of education, isn’t it? We don’t learn enough about actual heroes. Ever. And granted, they were not going to be taught when I was learning in high school. But certainly I’ve asked people who are a lot younger, if they ever learned about them and the answer is no. I think I’m glad for many reasons to have done this movie, but becoming familiar with the work they did is certainly one of them.

I watched this film first out of Sundance, along with the documentary “The Janes” and both played at the festival right around the 49th anniversary of Roe v. Wade. Then, of course, several months later it was struck down. What are your thoughts on how these two films came about around the same time about the same collective and then all of this change happened after they premiered?

We were not aware of “The Janes” documentary, and it is a documentary. We’re not a documentary. There’s a lot of movies that come out all the time about the same topics. I think “Call Jane” honors the spirit of the Jane Collective and is absolutely scrupulously truthful about their makeup in 1969, about the kind of work they did, and more importantly about the procedure itself. But beyond that, I think it’s zeitgeist. Of course, these things were going to be happening together. There was also a French film at Sundance.