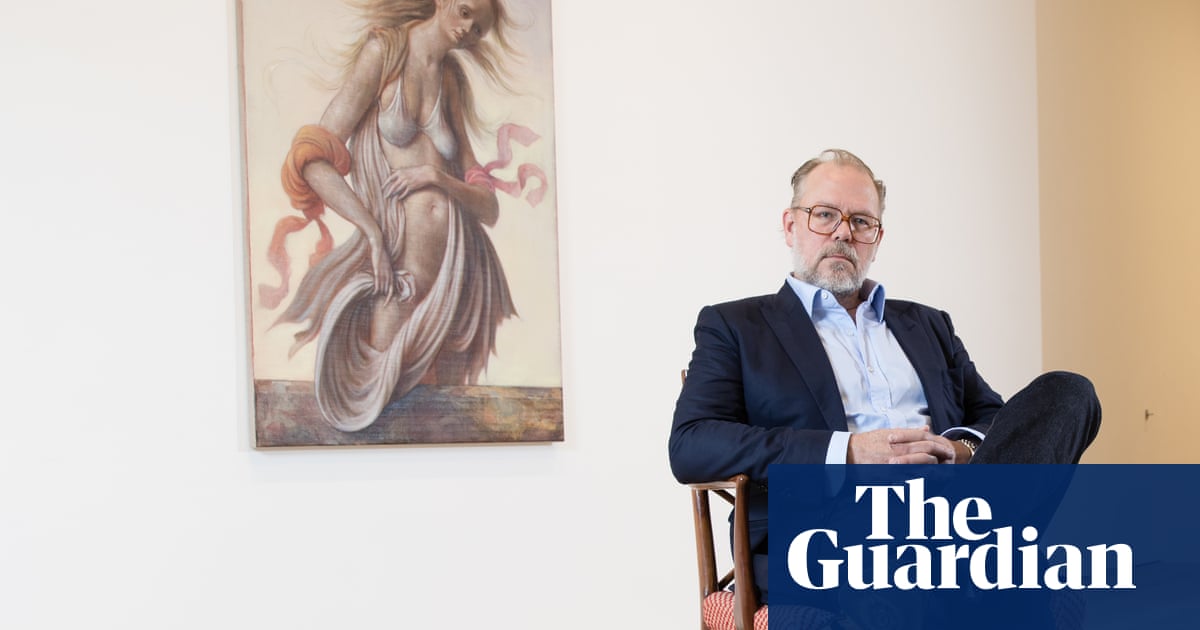 “They were pretty misogynistic images,” says John Currin. “I can’t deny that.” The 60-year-old American painter is recalling his first solo show 30 years ago. It consisted of pictures of nude, middle-aged women whom he unpleasantly described in the show’s press release as “old women at the end of the cycle of sexual potential, between the object of desire and the object of loathing.”

Some critics balked at this description, among them the Village Voice’s Kim Levin who wrote: “Apart from that, they’re awful paintings. Boycott this show.” And yet he has made a fortune from painting women’s bodies, from, as Levin put it “starry-eyed ingenues, mega-boobed bimbos, society matrons, and full-bellied old-masterly nudes” – . In 2008, even as a financial crisis clobbered the west, his 1999 Nice ’N Easy, depicting two Renaissance-inspired nude women against a black background, went under the hammer at Sotheby’s for $5.5m. There’s money to be made from painting women’s flesh.

Currin says he could get away with behaving so aggressively because, back then, he was very good looking. “It’s one thing to do that when you’re an attractive young man – another when you’re bald and old. You can’t use your own attractiveness as a get out of jail free card.”

Thirty years on, we’re sitting in another gallery, Sadie Coles HQ in London, surrounded by three of his latest paintings. Faces sag, breasts sag. But enough about Currin and me, two 60-year-old straight white men surrounded by naked painted women. “I’m still doing it, you know. I do look at women. I always wanted to look at men in a way that I could make a little more sophisticated than I have, but I think I’m not really capable of really visually complex thoughts about men.”

Are you a misogynist? “Misogyny’s kind of a dumb word. I use it because everybody else does. I don’t hate women. I hate men. Well, to the extent I hate anybody, I hate men more than women, I guess.”

His men are pitiful. In 1997, his Jackass paintings subverted mid-70s magazine ads showing white males at the top of their game – bare-torso grill masters, tennis pros in white, golfers in argyle sweaters – all surrounded by bevvies of adoring women in bikinis. With a few dabs of gouache, he changed those women’s fawning smiles into grimaces, as if symbolically castrating these alpha assholes.

When men and women meet in his paintings the result is often ridiculous. In his 2002 painting Office Workers for instance, a woman sits with her shirt open, breasts plonking on to the desk. A Brylcreemed male co-worker sits opposite clutching a huge erect penis that one critic described as facing off against the breasts as in a game of Rock Paper Scissors. “The viewer wonders perhaps if the member is not connected to the man’s groin, but instead a stand-alone appendage, proffered to the woman as a mere signifier of desire – one that is attached to no real source of power,” wrote the critic Naomi Fry. Like the Wizard of Oz, the penis in Currin’s oeuvre is laughably impotent.

Women in his work, by contrast, are potent objects for men to perv over. That, Currin argues, is the real history of art. “Painting has always been essentially about women, about looking at things in the same way that a straight man looks at a woman. The urge to objectify is more a male urge than a female one, and painting is one of the most personal and succinct methods of male objectification of the female.”

He has been called visual art’s Philip Roth, anatomising the tragicomedy of male lust. Roth has alter ego David Kepesh change into a breast in one story, while Currin depicts women with oversized breasts – as in The Bra Shop – as if they’re physically carrying the gazing male’s psychosexual burden while looking like Mad magazine depictions of the go-go dancers from Russ Meyer’s Faster, Pussycat! Kill! Kill! Some women find his images instructive. “Currin’s painterly representation of women – provocatively tactile, both sexy and gross, making me, as a straight woman viewer, get closer than I ever otherwise would to sensing the self-disgust a man must feel when springing an unwelcome boner,” wrote Fry.

Born in Colorado, John Currin had an epiphany soon after graduating from Yale in 1986. He read Joyce Cary’s 1944 novel The Horse’s Mouth and found a role model in its lovably scruffy painter Gulley Jimson. “I was in New Haven sponging off my girlfriend, hitting a loser streak. That book really helped.” How? “Just his desire to paint God’s foot or a tiger’s face resonated for me. It helped me to move away from what I was doing in art school which was a very masculine abstraction, to what I wanted to do, which was to follow my feelings. When you’re a student you’re partly trying to be one of the cool people. I learned the pleasure will come from using the things you carry around.”

Currin set out then to become a figurative painter, a vocation he thought appealing if ridiculous in the later 20th century. “It’s a joyous, intensely pleasurable playtime really – even if I wasn’t making money from it, or good at it, I’d be doing it. Painting probably is dead in terms of it carrying 98% of our visual life as it did 500 years ago, but I don’t care about that.”

But he had a problem. “As an American, I’ve always felt outside the painting tradition … like a bumbling tourist.” He compensated by reading up on art history, not least Kenneth Clark’s groundbreaking The Nude. He was inspired in New York’s Met by the glazes Velázquez used to make underpainted flesh appear so lifelike. Currin became such a master of these techniques that the late critic Arthur C Danto reckoned he was “a virtuoso of style and manner that would have been admired in Ferrara or Parma in the 1550s”.

All the while, though, Currin never lost the sense of the daftness of being a man painting nude women. His 1991 painting of a naked Bea Arthur, best known as the star of sitcom The Golden Girls, clinches the point. She gazes not with sexual availability but rather as if the painter has just said something witless to which she’s reacting with her trademark sardonic glare. But why has she got her top off? We will never know.

The great turning point in his life came in 1994, when he met his wife Rachel Feinstein. She was asleep inside a gingerbread house that she had made in New York’s Exit Art gallery for a performance piece. Currin has said: “Meeting Rachel changed everything. I just became overwhelmingly happy.”

For her, the relationship was more nuanced: “For a while being with John was difficult for me,” she told the New Yorker, “because he sees women as different beings, some kind of embodiment of creativity, of life and beauty, all these strange emotions.”

She nonetheless became his muse. “Obviously,” he says, “I like my wife’s face a lot. If you were going to make a stylised picture of a pretty girl it would be her. She’s a kind of odd-looking person – she doesn’t quite fit a particular ethnicity. She’s blond and her hair gets redder as she gets older. She has this wonderful long nose that’s easy for me to draw.”

There she is, like a postmodern Venus in Honeymoon Nude, from 1998. There she is with a baguette balanced on her head, breasts showing through a gauzy shirt in Red Shoe. And here she is right behind me, between two nude women in Gala. He worries about what he has done with his wife’s breasts, how they peep daftly through holes in a flimsy gauze top. “It’s not so much will they be offended as will I be embarrassed? Especially now that I’m older. Having the breasts cut out there – is that just going to turn out to be embarrassing, you know personally?”

He directs my attention to Silver Hippy, a tragicomic painting of a woman gazing in melancholy, with a lovely swirl of curving fabric falling from her body. “A lot of the elegance of my drawing is partly accepting the silliness of the same thing. Part of being a figurative artist is that you can’t be against the cringeyness of theatrical moments. It’s like the end of Death of a Salesman. Biff slams the door and the scenery shakes. You’ve got to be into that.”

One critic suggested that John Currin is as transgressive as Kara Walker or Chris Ofili, but he transgresses in the wrong direction. That’s to say, he makes paintings about porn, takes pleasure in the wrong things, depicts women’s objectified bodies. How can that artistic project be anything but problematic in 2022? Currin reckons it would be very hard for a young artist today to be so perversely transgressive. “I wouldn’t want to be a young person but then again I think only young people can make something out of an enormously hypocritical moment where everybody’s lying.” What do you mean? “There’s much less freedom and it’s kind of expected that we have less freedom, which is quite surprising.” Do you mean cancel culture? “No. It’s not so much someone gets cancelled for being provocative, it’s more being made to repeat untruths. There’s a lot of not so much banned speech as compelled speech. I don’t want to get too political.”

But Currin’s work already is political – and topically so. Maybe his paintings are what we need to understand toxic masculinity. “There is immense value for feminist movements – and for humanity as a whole – in carefully examining these portrayals of the masculine psyche,” wrote curator Alison M Gingeras of Currin and Roth in Mansplaining: Figuring Masculinity in the Age of #MeToo.

Currin demurs. He feels old and old-fashioned. “My sensation is that the sexual revolution is utterly over and there’s a swing backwards, not in terms of Victorian prudery or conservative prudery – it’s something else.”

Currin glances around his new work. “Even I can look at the libertinism of my paintings and see it’s from another time, that it’s really old-fashioned. It’s not today. It’s not hip. It’s the work of a 60-year-old man.”