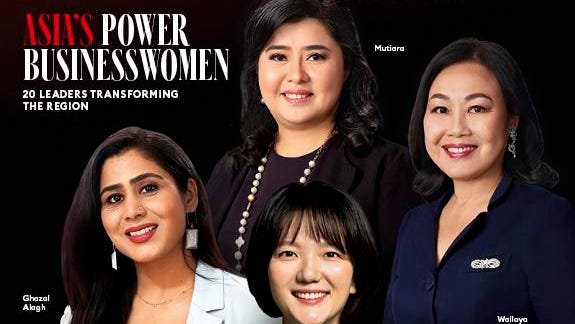 SINGAPORE (November 8, 2022) – Forbes today unveiled its 2022 Asia’s Power Businesswomen list, honoring 20 outstanding women in business across the Asia-Pacific region. The complete list can be found here and in the November issue of Forbes Asia.

Rana Wehbe Watson, list editor, said: “Forbes Asia’s Power Businesswomen list this year highlights 20 executives and entrepreneurs who are leading their companies’ transition to a post-Covid era. Some of these women are thriving in male-dominated industries while others are running established family firms. Two have even launched successful businesses that were inspired by their journeys into motherhood.”

The 20 women featured are newcomers to the list, further expanding Forbes Asia’s network of female trailblazers in the region. They were selected for their achievements in their current role running a business with sizable revenue and demonstrating strong leadership throughout their career.

Among the women on the list is Choi Soo-yeon, who was appointed in March as CEO of Naver, South Korea’s largest internet company by market capitalization. In Choi’s first major decision as CEO, Naver announced in October that it was buying California-based used-clothing marketplace Poshmark in a deal valued at about $1.2 billion, which will be Naver’s biggest acquisition once completed. The Millennial CEO has ambitious plans for Naver. In April, she set the goal of more than doubling annual revenue to 15 trillion won (about $12 billion) within five years. The company will continue to make content-related acquisitions for its webtoon platform, and also plans to grow its metaverse platform Zepeto globally, and invest in related businesses.

Also on the list are twin sisters Anna Nakajima and Mizuki Nakajima, cofounders of Coly. At age 33, they are the youngest listees this year. They founded smartphone app Coly in 2014 to fill a significant gap in Japan’s gaming market – a shortage of games appealing to women. Last year, the firm listed on the Tokyo Stock Exchange. The company’s hits include narrative games like its long-running Drug Prince and Narcotic Girl and Stand My Heroes.

Another trailblazer is Wallaya Chirathivat, president director and CEO of Thailand’s largest retail property developer Central Pattana. At the beginning of this year, she became the first female CEO at the listed company in the Chirathivat family’s Central Group. She has earmarked 200 billion baht ($5.24 billion) to significantly expand the company’s footprint in Thailand and worldwide, increasing the number of its shopping centers by a third to 50 over the next five years and adding 34 hotels to its portfolio of three.

When Covid-19 upended the tourism industry in March 2020, Kwee Wei Lin had just taken the reins as president of the Singapore Hotel Association. Its 160 members represent about 80% of Singapore’s hotel rooms. As new tourist arrivals tumbled to virtually zero overnight, Kwee’s top priority was pivoting marketing and services to cater to the domestic market and staycations. As head of hotels of her family’s Pontiac Land Group since 2017, Kwee oversees six hotels (four in Singapore and two in the Maldives) with 3,000 staff. Following Singapore’s full reopening in April, occupancy rates at Pontiac Land’s hotels in the city-state have returned to over 80% of pre-pandemic levels.

Another notable woman on the list is Doris Hsu, chairman and CEO of GlobalWafers. Hsu leads GlobalWafers, one of the world’s largest suppliers of silicon wafers used in making chips. In June, the company announced it would invest up to $5 billion in a new wafer plant in Sherman, Texas, that would create as many as 1,500 jobs.

Ghazal Alagh, cofounder and chief innovation officer of Honasa Consumer, started the Gurgaon-based company with her husband, Varun, who is CEO, in 2016. The company became a unicorn in early January when it closed a $52 million funding round led by venture capital firm Sequoia Capital India, valuing it at $1.2 billion. It all started when Alagh was looking for chemical-free alternatives for their infant son who had a skin condition. Honasa Consumer, which launched with seven products including baby wash and shampoo, has since expanded into cosmetics and skincare.

Kristy Carr is another woman who embarked on her entrepreneurial journey shortly after becoming a mother. She founded baby formula maker Bubs Australia in 2006 after struggling through early months of motherhood and her daughter’s food allergies. The Sydney-based company, which started trading on the Australian Stock Exchange in 2017, saw revenue more than double to a record A$89 million ($57 million) in the latest fiscal year ended June 30. It is now gearing up for even faster growth after the U.S. launched Operation Fly Formula, in partnership with overseas producers, to address a crippling nationwide shortage earlier this year.

Losing both her parents in 2004 to lung cancer was the wake-up call that pushed physician Mutiara, president director of Murni Sadar, into entrepreneurship. She cofounded Murni Sadar, a six-hospital chain with the goal of offering specialized treatment for cancer and heart disease. To support rapid growth, Murni Sadar earlier this year listed on the Indonesia Stock Exchange and raised 325 billion rupiah ($21 million). Mutiara and her family retained a majority stake in the company, which had a market cap of 3.7 trillion rupiah ($235 million) as of mid-October.

Chairman Wang Ying founded Chengdu Easton Biopharmaceuticals in 2009. The company which develops, manufactures and sells a wide range of generic drugs, started trading on the Shanghai STAR Market in September 2020, and has continued to grow under Wang’s leadership. In the first nine months of 2022, Easton’s revenue increased 16% to 897.6 million yuan ($123 million) while net profit rose 5% to 195.5 million yuan ($27 million). In July, the company won a bid for four of its products, including treatments for Alzheimer’s and hepatitis B, to be included in the government’s centralized bulk-buying drug program.

Forbes champions success by celebrating those who have made it, and those who aspire to make it. Forbes convenes and curates the most influential leaders and entrepreneurs who are driving change, transforming business and making a significant impact on the world. The Forbes brand today reaches more than 140 million people worldwide through its trusted journalism, signature LIVE and Forbes Virtual events, custom marketing programs and 48 licensed local editions in 82 countries. Forbes Media’s brand extensions include real estate, education and financial services license agreements.